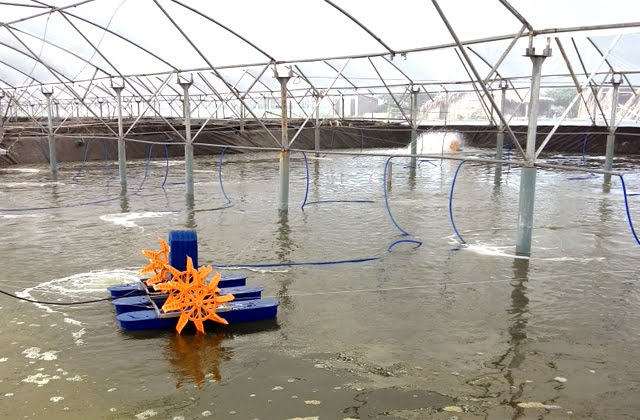 Biofloc technology was initiated by Professor Yoram Avnimelech in Israel and first applied by Robins McIntosh in intensive shrimp farming in Belize, Indonesia. Let’s follow the details in this article to learn about a new technology that has recently been adopted in the shrimp industry

The biofloc system was developed to improve environmental control in aquaculture. Usually, high density shrimp farming requires a waste treatment system. The biofloc system allows organic waste and microorganism groups to exist in the pond. Through the process of mixing water and pumping air to maintain floc particles, the water quality is ensured. BFT technology is the solution to two problems: (1) Removal of metabolic nutrients into heterotrophic microbial culture of treated pond water, (2) Using Biofloc as supplementary food. As a result, BFT reduces feed costs and is considered a solution to the sustainable development of industrial aquaculture.

Higher animal density in any aquaculture system means that the system will be more intensive, especially when little or no water is exchanged. The optimal shrimp density for a super-intensive system will depend on management and production goals. Higher shrimp density leads to a greater concentration of microbes in response to more nutrients. This will typically increase the oxygen demand of the system and augment the generation of solids. Also, higher density can slow shrimp growth rates, although a greater overall biomass may be produced.

In super-intensive biofloc shrimp culture systems it seems appropriate to refer to shrimp or shrimp biomass density in relation to volume (ex. shrimp/m3 or kg shrimp/m3 ). This is a departure from much of the literature on pond culture which refers to density or biomass per area with units such as shrimp/m2 , shrimp/acre, and shrimp/hectare. In biofloc systems the microbial community is predominantly suspended in the water column. Therefore, the level of biological filtration is dependent on water volume. Also, a major benefit of these systems is low water use, especially marine water which can be expensive at inland locations

The power requirements for gas and water flushes of biofloc systems are more advanced than conventional systems and most of the circulating systems. Shrimp farming ponds using biofloc technology pumps air with a capacity of 25-30 hp/ha. Such high rates of depletion can not be applied to undeveloped soil-based ponds, as this can cause soil erosion, so most biofoc farming ponds have linings or concrete base. Biofloc technology is not recommended for areas with unstable power supply and high electricity prices.

In the biofloc system, an important factor in ammonia control is the C: N ratio added via feed or other sources. A protein of about 30-35% has a low C: N ratio of about 9-10: 1. Increases the C: N ratio to about 12-15: 1 to control ammonia levels through heterotrophic microorganisms. Low C: N ratios can be controlled by adding high C: N ratios or increasing C: N ratios by using low protein diets. Ammonia is rapidly absorbed by bacteria after carbohydrate supplementation. Control of ammonia by heterotrophic bacteria is more stable and durable than algae or tritrification.
There are many sources of raw materials that can be used to provide carbohydrates to the biofloc system, including cereal, molasses, bagasse, chopped hay or other sources. To control the levels of ammonia through heterotrophic bacteria, supplemental carbohydrates must be administered according to the rate of feeding. For each kg of protein with 30-38% added to the system, 0.5-1 kg of carbohydrate should be supplied.
Managing the biofloc farming system is not straightforward, requiring the relatively complex techniques needed to ensure a high performance and system performance.